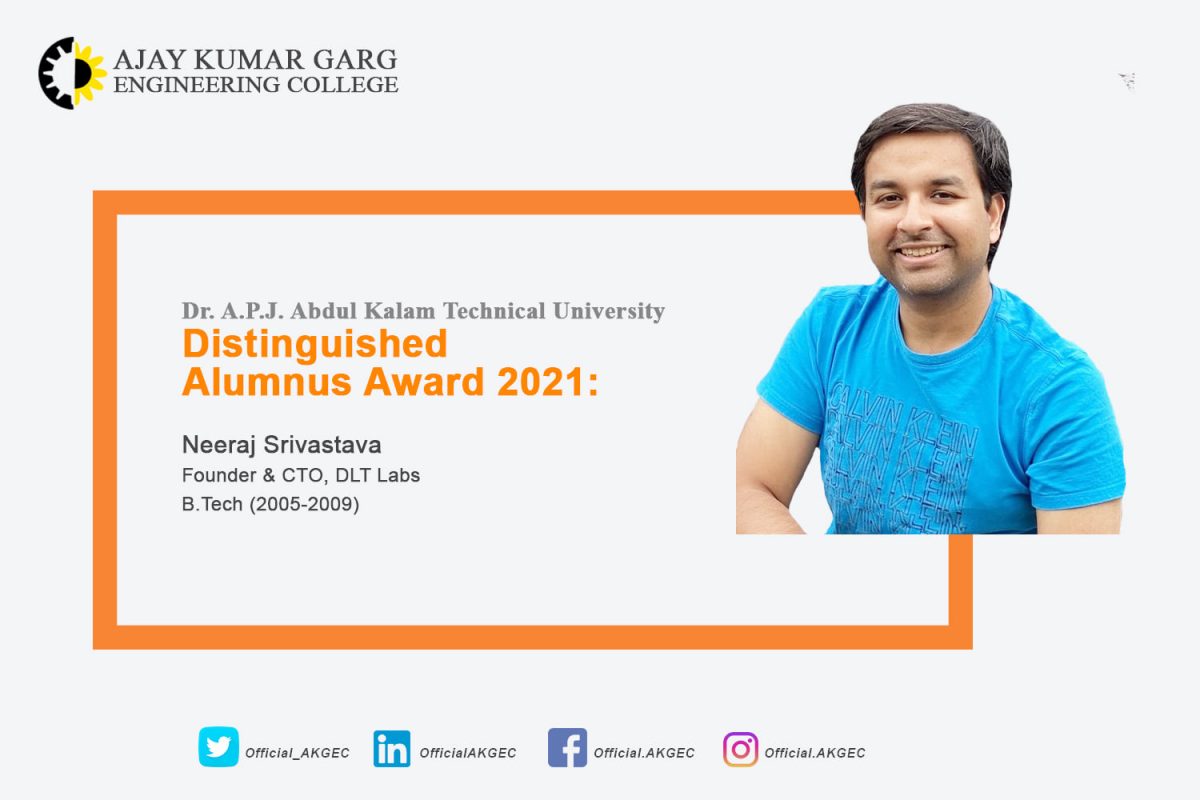 It is a matter of great pride for the AKGEC family – the Management, faculty, staff, students and the alumni, that Mr. Neeraj Srivastava, a 2009 B.Tech graduate from Electronics and Communication stream, has been awarded the Distinguished Alumnus Award by Dr. A.P.J. Abdul Kalam Technical University, Lucknow. This is the first time that the University has instituted the award in 2021.

About 1000 nominations from the University affiliated colleges, including Govt colleges, were received and reviewed by various committees including Academic Council. Of the 10 short listed candidates, Mr. Neeraj Srivastava was finally selected for the award and awarded by the Governor of Uttar Pradesh on 16 January, 2021 during the AKTU Convocation.

Mr. Neeraj is the founder of DLT Labs – a name well known in the blockchain space. With the strength of 250+ people globally and offices at multiple locations i.e. Canada, India, Japan, USA and Singapore, DLT Labs has  been growing exponentially,  well on its path to be the next Billion dollar enterprise. Although, DLT Labs has been in existence since 2012 but in last 3 years they have positioned themselves as the global leader in the blockchain space with the biggest ever implementation on blockchain technology for Walmart, also winning the CSCMP Innovation Award for this product.

Besides the above, Mr. Neeraj has achieved a patent grant for Relational Data Management and Organization Using DLT in his name and has research paper publications in the field of Blockchain. He is also holding prestigious positions including Member of Forbes Technology Council, Board Member of IBM Blockchain, Blockchain Expert with Bank of Canada & Monetary Authority of Singapore (MAS) and Team Leader  at Royal Bank of Canada to launch Apple Pay. Mr. Neeraj and his company are the first to launch EMV based Apple Pay all over the world and to open the world’s first Blockchain Lab at BSE. He is one of the first, across the world, to launch a full blockchain course on Udemy and is an  active speaker on  technologies across the globe.

In addition to his achievements after passing out from the college, Mr. Neeraj had been active in research and development during his tenure in the college as well. He was the founder member of the Software Development Centre established at AKGEC in the year 2008. The centre is engaged in promoting innovative work, project based learning, industrial consultancies and entrepreneurial skills amongst students.

We are indeed proud of him and wish him the best for all his future endeavours.