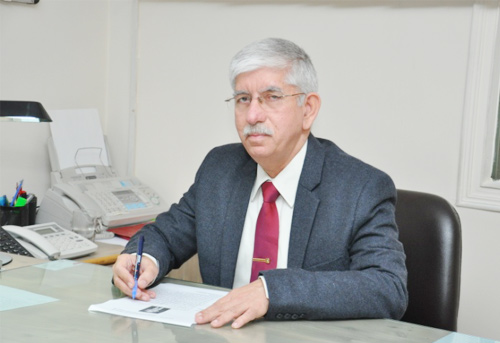 Gp. Capt. (Dr.) Pradeep Kumar Chopra (R),VSM entered the field of education in the year 2004 after 24 years of exemplary service in the technical branch of the Indian Air Force. He earned his Bachelors degree in Engineering (Electronics) from Delhi College of Engineering in the year 1979 and Masters in Technology from IIT Delhi in the year 1985. He also graduated from the prestigious Defence Services Staff College, Wellington and earned Masters degree in Defence Studies in the year 1993 from Madras University. While he was in the Indian Air Force he was part of, and headed, a number of important technical projects. For his exemplary services he was awarded “Vishist Seva Medal” by the President of India for engineering skills of highest order in the year 1993. He took voluntary retirement from the IAF in the year 2004 and entered the field of education. He has done his Ph.D in the field of ‘Electronics & Communication Engineering’ from the prestigious G.G.S.I.P University, New Delhi. His areas of specialisation are Radar and Satellite Communication. He is Fellow of Institution of Electronics & Telecommunication Engineers, New Delhi. He is an expert of the National Board of Accreditation (NBA) in new system of outcome based education under Washington accord for Tier-I and Tier-II by virtue of which he inspects Engineering colleges for NBA accreditation for UG/PG Engineering courses as a specialist member of NBA accreditation team. He is also nominated by AICTE as Margdarshak to mentor institutes to achieve NBA accreditation.